How to Ask a Friend Out successfully – Avoid losing the Friendship

Asking a friend out is sort of like asking your doctor to come to your home to give you a check-up. It instantly gets more personal, and allows little room for mistakes. 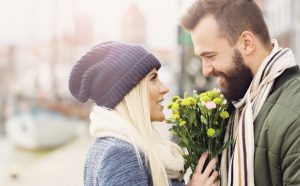 You want it to work out, because the stakes are exponentially higher than with a stranger.

Trying to understand how to ask a friend out on a date can be one of the most intimidating situation you can find yourself in. But there are certain rules to go about this great endeavor that will decrease the risk of losing the friendship, even if doesn’t work out.

To ensure the best outcome, follow these tips, and the asking might have just gotten a little easier.

One of the biggest concerns when dating a friend is to lose the current friendship, in case things should go bad. One good advice here is to approach a mutual friend; she or he can usually confidently speak as to the current situation as she or he knows the both of you. This approach can help to overcome some concerns as to potentially losing or damaging the friend-zone!

By asking one of your mutual friends about him, you get one step closer to finding out his intentions, if he has any. Ask direct questions, and leave no stone un-turned. Did he talk about you? If so, what did he say? What is his type? What does he think about you?

Just make sure to ask a trustworthy friend who can keep a secret until you are ready to take the next step. You want to avoid an embarrassing situation, in which a friend decides to talk, and consequently ruins your plans.

Ask him to go out with you and your mutual friends. Going out in a group will appease your anxiety, and it allows for time to observe the situation.

When appropriate, make a move by asking him to dance, or buy him a drink and start chatting when the others aren’t around. Take charge, and find out if he’s feeling the same way.  Give compliments, when the chance arises.

another great way to reach out to him and make the first move towards asking him out, is to send him a text message here and there, and see what reaction you get back. Send him a few texts to make him smile and see what he comes back with!

If you are unsure about his feelings, check out some signs he likes you more than a friend to find out if he is interested in more. In case you then think the interest is mutual, start spending time together alone.

Go see a movie, work out together, or invite him over to your apartment and cook one of your specialties. Activities as such will show if you get along and have topics to talk about as a potential couple.

The advantage when asking a friend out on a date is that you already know each other enough to have a certain level of comfort, which allows for authentic behavior on both parts. It helps that you know about his hobbies and interests, so use this knowledge wisely.

It will help you plan a fun first date, and he will applaud you for your efforts, even if he remains a friend.

You are thinking of Dating a Friend?

All you need to know on how to get out of the Friendzone!

4. How to get out of the Friend Zone? Talking is Gold!

An essential part of asking a friend out is to guarantee the other person that it won´t damage or destroy your friendship. Be open about what your expectations are and don´t shy away from an honest conversation.

You know the risk, and if you´re still willing to give it a shot, then it´s worth going for it.

Not entirely sure what to talk about with a guy when trying to ask him out? Well, there is a reason you feel attracted to him, so tell him why you want to go out with him and what characteristics you like most about him.  He will be happy to hear it.

However, be modest with your sweet talk. You don´t want to scare him away! 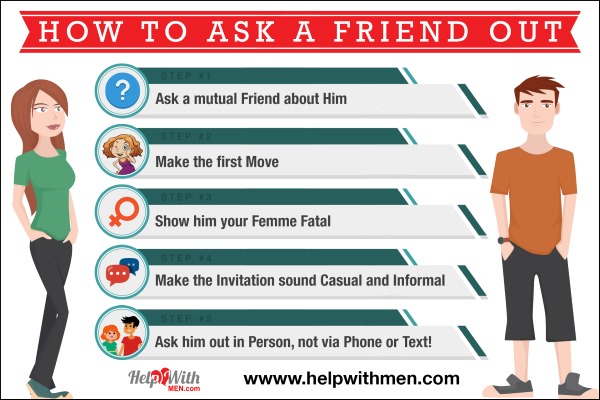 5. Show him your Femme Fatal

One of the things that separate a friend from a potential girlfriend is the lack of sex and physical attraction. In order to see you as someone he wants to go out on a date with, you should give him a preview of your girlfriend potential.

Show him a different side of you! He already knows your character and heart, but what he doesn’t know yet is your sexual side. This doesn’t mean that you should have sex right away. Not at all, actually!

Give it time, but in the meantime, show him what´s on the menu. Dress to impress, show off your body, be confident and proud, and act passionately by kissing him with the full intention of taking him home (even if you don’t).

In the end, your story either ends with the two of you being in love, or you will remain friends.

By the way, if you are still kind of shy about you asking him out, you can always also try it the other way around, meaning find a way to make him take the initiative. Check out this article here to see how to get a guy to ask you out, instead.

Hopefully it was a mutual decision, but if things didn’t work out, don´t hold a grudge. That´s why talking through it is crucial to avoid a crisis, in case things don’t go as planned.

Respect the other person´s feelings and start the rehabilitation process of your friendship, if needed. You will be happy to have tried. And if things did work out, be as happy as you can be!

7. How to ask a Friend out for Coffee

Let’s look at one very specific way of asking a friend out, that is asking him out for a coffee. Why for a coffee? Because asking someone of for a cup of coffee is pretty much the most casual way you can put the idea of getting together.

Further, ‘casual’ is exactly what you want to sound and appear, when asking a friend out, as this reduces the risk of ruining any friendship the two of you currently have.

Why? Because the word ‘grab’ makes the invitation sound very casual and informal. Not only does this make the person you invite feel more comfortable to either accept or possibly  deny the invite, but it also makes you look very relaxed and casual about the potential get-together.

And that is exactly how you want to appear in case the person you ask out ends up turning your invite down.

By the way, the best way to ask your friend out is in person, instead of over the phone or via text. That allows sounding even more casual, as you can tie in the conversation about ‘grabbing’ a cup of coffee with any other conversation you are already having.

Moreover, it gives you the opportunity to physically appear self-secure and open, by e.g. looking in his eyes and smiling.

On the other hand, when asking your friend out over the phone or via text message, the other person might wonder how exactly you meant this invite – as a friendship invite or as something that might lead to more.

How to get out of the Friendzone – The Relationship Guide!