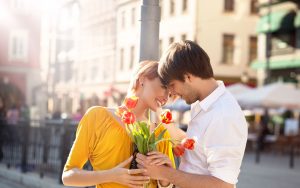 When you meet a guy you really like, employing a few tactics is necessary to keep him interested and to eventually ask you out.

Some guys either just don’t see you as a dating potential or they are simply scared of asking you out; sometimes it is then not easy to figure out just what makes him commit to you. Further, if he thinks of himself as being less successful or less attractive than you are, he will definitely feel discouraged to ask you out on a date.

Help him make a move by utilizing the following tricks:

Basics first. So let’s look at how to get a guy to notice you. You can’t get a guy to ask you out if he doesn’t notice you, so be noticeable. Wear clothes that accentuate your best assets, but not a plunging neckline so low, it shows everything you have (appendectomy scar and all). Be tasteful in choosing outfits and dress and act classy, not trashy.

Physically gifted women tend to show off their ample assets. You will probably attract a lot of men that way, but maybe not the kind of men you want to date.

2. Give him some Eye-Contact

A lot of guys won’t ask a girl out because they’re not really sure if a girl’s into them. They’re just being protective of the ever-mighty male ego. Also, the not-so-confident guys would dread being rejected. You wonder then how to get a guy to ask you out? Give him a little hint by making eye contact. Not a long, creepy stare, just enough to let him know that it’s okay for him to come over, and ask for your number or something.

Try to catch his eyes and hold his gaze. You can let out that pretty smile of yours as a bait. If he’s still not coming to you, you can try it one more time and stare a little longer, but don’t do it for the third time – he’s obviously not interested.

Show him you’re interested by complimenting his looks. If a guy is intimidated by you, this will make him feel at ease. Ask him to share something about himself. Ask about his job, his hobbies or sports he likes – anything. Extend the compliments to his interests. If he likes volunteering, arts or literature, tell him you find it wonderful that he likes those things. Be a genuinely good listener, a great man will notice.

Don’t try too hard to be witty; let it come out naturally. Don’t obsess over how to get a guy to ask you out. Hang out with witty people and learn from them. If there’s no time for that, just be yourself. Put your guards down and simply talk what’s on your mind. Being witty is about timing and saying unexpected things. Engage in funny, sexy banters, and tease a little. Even the most unskilled can come up with something if they feel comfortable enough with the person they’re talking to.

If your idea of fun and “carpe diem” is being wasted at parties and spewing words your future self will hate you for, then don’t expect a quality man to ask you out. When a man sees an inebriated woman, he will most likely question her character. Know your limits and always be in control of the situation. Don’t be both the damsel and the distress.

Drop subtle hints that you’re available. Tell him there’s a new movie coming out that you want to catch. Have a spare ticket for a guy-friendly concert or a game he’s dying to see. Another trick for those who can’t ask a guy out directly: invite him on a group date. You can gauge the second time around if he’s interested. If it didn’t get anywhere, you wouldn’t feel so rejected, and you even had fun with friends.

Still not entirely sure how to get a guy to ask you out? In the era of Facebook and Snapchat, asking someone out is still daunting, especially if you’re a girl. We still feel uneasy to approach a guy. It just doesn’t feel right sometimes. Well, you can stop all those worries because the majority of men actually likes it when you ask them out. You’ll take the burden from the shy guys. It will also help you take control of your dating future. Relax! After all, you are only asking him out on a date, you are not asking him to marry you, nor are you at this point concerned to find out how to make the guy fall in love with you!

When subtle hints don’t work, simply tell him that you like to hang out with him, over coffee or while watching a movie. If he tells you NO, well, at least you’ve tried. Show him you’re confident and that his rejection does not bother you.