So, it has been a few days and there was nothing but crickets on the phone. Naturally, you start to wonder “Should I text him first”? 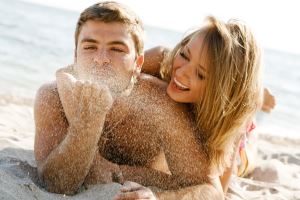 This is a very tricky question, and whose answer women often get wrong, unfortunately. It´s one of the most tempting things, if he´s not texting, to simply text first, and that´s ok, at least in some circumstances.

I´ve been getting it wrong many times myself, so don’t worry, you´re not alone in this endeavor. The best thing to do is to ask yourself a few essential questions, and then to make a smart decision based on the answers.

First, consider if one or more of the following situations apply.

If you feel in your particular situation one or even more of above applies, then you´re in the clear of texting him first without feeling awkward about it. Let’s get into these situations in more detail.

1. Something reminds you of Him

It´s perfectly fine to send him a cute or funny text if something reminds you of him, even if you weren’t texting at the time. Let´s say you discussed favorite movies on your first date, and suddenly his favorite movie is on TV and you want to send him a screenshot of it. In such case, you should definitely go for it! You sending him a text message of something that the both of you talked about before, and that he likes, is one of those texts that will make him smile inside and outside.

2. Is He waiting for me to text Him? Yes, if He already told you He likes You!

You´re in a pretty secure place if you´re heavily flirting back and forth, and in the process, he already told you that he likes you. Then you have nothing to lose to text him first when you feel like it.

Don’t do it all the time, but if you just want to say “Hi, how is your day going?” or use another casual conversation starter, then there´s nothing wrong with that. He likes you, so of course he wants to hear from you, and will be happy to see a text from you pop up.

Don’t Text Him before You read this!

3. You want to apologize for Something

If there´s something lying heavy on your heart, a matter of regret or embarrassment, then don’t wait around for him to text you, but rather take the first step. That way you can clear the air, be authentic and honest, and avoid any misunderstandings.

Do you feel you offended him with something you said last time you met? If you´re not sure, text him anyway and approach the subject delicately, and simply apologize. It´s not as hard as it sounds! And if he responds back positively, you can stop worrying about what he might think.

4. You’re sure that You´re not addicted to Him

This is the hardest lesson to learn, and believe me, we´ve all been there, but DON’T text him if you´re obsessing over him! You have to make sure that you´re acting healthy regarding him and not changing your whole life to accommodate his. Don’t text 10x a day and always be the first to text. Let him work for you too!

Be aware of addictive behavior, and if you recognize such, stay away from him, and wait it out. If he´s interested, he´ll text, otherwise let him go. Don’t come across as desperate and in love at a too early stage in your courtship. Appearing too desperate really is a major dating mistake.

It´s difficult to do, if you like him a lot, but stay strong and let the addiction pass. Only if you´re not behaving obsessively, you may text him first.

5. You trust your Instincts

If your gut feeling is giving you positive vibes and no hesitation about texting him first, then that’s probably a good intuition to go by – otherwise don’t. We love to ignore the warning signs, but usually when we feel something isn’t right about it, there´s a reason for it.

We may know, deep down, that he´s not worthy of our time and admiration. By going ahead with texting anyway, despite your inner doubts, you´ll only make matters worse. If your gut says yes, however, then text him first, if you´d like.

6. Should I Text him first? Yes, if you waited long enough!

You have every right to text him first, if you exchanged numbers and then nothing happens for a week! Give yourself some time, and don’t be pushy, but if 5-7 days have passed, please text him! At that point you can remind him of your meeting and tell him that you´d like to go out if he´s free.

Maybe he was just too shy to text you first, so find out the reasons behind it first. That’s a long time to wait after having a great encounter, and if you don’t make the first move, he´ll forget it ever happened, and you´ll become the dreaded “acquaintance” for life! Him not having text you up until now might be just a sign he likes you but is scared of making the first move.

7. You’ve got a second Opinion

It never hurts to listen to some expert advice from your closest friends! They will be brutally honest with you and tell you straight up what´s the best course of action. Don’t hesitate to tell them the situation and then ask if it´s OK for you to text first. Lay out all the facts, circumstances, and shared history, on which they can base their recommendation to you!

8. Don’t text him … unless You have Something valid to say

You still wonder “Should I text him first”? I generally advice against texting “hello” or “what are you up to?” only. It´s too vague and insignificant. If you´re interested in someone, you have to put a little more effort into your words.

My advice in general is to never text first unless you have something valuable to write. Tell him about a funny encounter today, or a show you just started watching and can´t stop binge-watching. He might want to catch up and watch an episode with you. This could be an idea of yours to slide into the conversation!

Everything you say should have meaning, even the shortest text message. Be specific and if you remember he had an important event today, ask him about that, or send your well-wishes in advance. It´s more than OK to text him first under those circumstances.

Also read: The best signs he deeply cares about you

How do you get a guy to love you the way you want to be loved and cherished?

How to get Him instantly Go Crazy for You!