Signs a Guy likes you but is Scared - Top 9 Ways to find out for sure! | Help with Men

Isn´t it the sweetest thing when a guy is affectionate towards you, but scared to make the first move and ask you out? It is, but on the other hand, how can you be sure that he really likes you? What do you need to be on the look-out for? 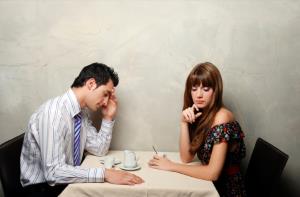 Here are the 9 top signs a guy likes you but is scared. So nervous and scared, that he simply would not admit to it.

1. He’s nervous around You

Being nervous is a strong indicator that he just doesn’t know what to do with himself around you! If you notice him playing with his hands and not knowing where to put them, or maybe him trying to always have a friend around; a person he feels comfortable with and can use as a distraction if it gets too intense in your presence, then he sure likes you.

Nervously playing with his hands is a body language sign he is actually flirting with you. However, he´s more than a little afraid and unsure on what to do next. Maybe you want to help him out a bit, if you´re interested as well! Flirting with a shy guy definitely has its challenges, but with the right technique, that can be done as well!

2. He asks about Your weekend Plans

Is he inquiring into your weekly schedule or weekend plans? If he´s saying things like “what are you doing this weekend?” or “what do you do after work?”, then he´s trying to figure out how to ask you out!

He´s waiting for the right moment, and is going for a vibe from you that indicates that you´re free and open to suggestions. If this cycle keeps repeating itself for a few weeks, maybe you want to take the lead on this one, before you´re both old and gray? If you need some inspiration with that, check out this article on what to talk about with a guy. Don´t be shy; he´ll be grateful.

How to know a Guy likes You but is scared?!

Get the ultimate Love Guide!

3. How to know when a Guy likes you but is scared? He happens to be at the same Place as You a lot!

Is he mingling and hanging around everywhere you go? Not in a creepy and stalker-like way, of course, but if he´s making an effort to be near you, talk to you whenever the chance arises, and just be present as often as possible, then he´s got a crush on you!

Is he taking his breaks at the same time as you or joins you and colleagues for happy-hour after a long work day, he might just be trying to get your attention (and number!).

Also read: How to make a Guy want you

4. One of the best Signs a Guy likes you but is scared? He´s smiling all over You!

Ah, the classic smile of someone who is fascinated with the other person. It´s easy to spot, and can make someone´s day. If he´s smiling from one end to the other, constantly, and at everything you say or do, he´s got a thing for you.

Men don´t smile that often, unless they have a really good reason to, since they like to showcase their toughness! You can feel quite special, if he´s giving you his charming smile at all times.

The eyes are part of it too. You can tell by the way he smiles, and how his eyes light up when he sees you (which is different than regular eye contact).

5. He doesn’t notice anything else around Him

Is he fixated only on you? Let´s say, if there´s an earthquake, do you think he´d notice? Most likely not, if he´s into you. A clear sign of interest is when you have his undivided attention for you and what you have to say.

He´s doesn’t want to be bothered with the conversation of others, and is in complete awe of you, but something is holding him back – his fear! Sounds familiar? Make him feel comfortable and show him that you like him too.

6. He compliments You shyly

Compliments are a tricky thing, since you can never sense how the person is going to react, but if he doesn’t care, and wants to compliment you anyway, then that’s a strong sign he secretly likes you more than just a friend. Does he tell you how great you look in your new outfit, or what beautiful eyes you have? He´s into you! No man will waste his energy on sincere compliments, if he doesn’t like you.

Don’t worry if he´s hesitant. It usually shows that he´s scared of the next move. He´s working his way up towards asking you out, but wants to get a feel for your response first by complimenting you. Compliment him back, if you´d like! It will help ease his anxiety.

7. The Guy is looking at you when You´re not looking

This is a big one, and friends can usually be good observers on that, and confirm your suspicion.

Is he looking at you a lot, when you´re not looking his way? He´s trying to watch the woman of his desires from afar and wants to admire your curves, your smile, and your beauty!

That’s how he does it, without being compromised and having to face you directly. Maybe he thinks you´re out of his league and he´s insecure with himself, and that´s what´s stopping him to approach you. Ask your friends to watch him for a bit, and give you feedback on how much he stared!

8. He tells his Friends about You

Still looking for more signs a guy likes you but is scared of admitting to it (and to you)? You might never have met his friends, but surprisingly enough, they all seem to know about you! That tells you that he talked about you at some point.

Maybe he confessed his feelings to his friends and they´re trying to play matchmakers. You can usually tell when they´re trying to set something up. An outside intervention of that sort is often a good plan, if the man himself is not confident enough to do it on his own.

It doesn’t mean he´s not a great guy, but maybe too shy and simply scared of what you will have to say! Any prior, negative experience with women, such as being turned down multiple times, can lead to a lack of confidence in the dating world.

How do you get a guy to love you the way you want to be loved and cherished?

How to know a Guy likes you but is scared – The Relationship Guide!