Lying is something we all do on a daily basis. Many of us thereby do not even care about how to stop lying, not even when we lie in our relationships. We all share a version of our story or parts of the truth that we think are acceptable. We omit little details that could make other people uncomfortable.

It’s also common for us to hide our true feelings or exaggerate our talents and achievements. 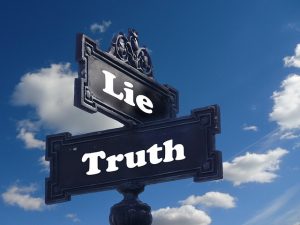 Sometimes a lie is more comforting than the harsh truth, and how many times have we lied to someone so as not to hurt their feelings? Genuinely nice people may find it hard to pinpoint someone’s faults that they resort to lying; they would even deny that something is wrong. Things like this can backfire and cause more troubles. Although small lies may not cause lifelong repercussions, habitual lying in a relationship can be devastating.
Deception may also start as small, insignificant twisting of truths – such as telling your partner that you went to bed early – when you have stayed past midnight, chatting with an old friend.

The first time you lie without getting caught, it will be easier to continue lying and whatever guilt you have will slowly dissipate. Lying by omission occurs when you fail to mention important details in your story to create a misconception.

Do you often lie automatically when confronted with the truth? Do you want to stop feeling guilty and instead have a strong relationship built on trust and respect?

How to stop lying – Change will not happen overnight

When you are already in the habit of lying, change will definitely not happen over night but will require a conscious effort on your behalf. However, like any habit, you can also change the habit of lying. These tips will help you get there:

1.    Identify the Reasons why you lie

Lying doesn’t mean you are a bad person, but it depends on the reasons behind it. To stop it in its tracks, you need to get to the bottom of this disagreeable habit. Women often lie about their age, weight, plastic surgeries, and so forth.

Both men and women often lie to avoid conflict and criticism. In an abusive relationship, women are forced to lie for their safety. Knowing the reason behind your compulsive lying will paint a picture of the type of relationship you’re in. Perhaps there are issues you need to resolve in the relationship, or maybe it’s better to throw in the towel and save yourself.

Read more: Follow these Steps to Save Your Marriage

2.    Understand what Lying can do to your Relationship

What you may think as being trivial can be upsetting to your significant other. Keeping a secret is also a form of lying, especially if you’re hiding something that would greatly affect them.

The convenience of making up a lie often causes us to justify the act. Put yourself in the other person’s shoes, would it hurt to know that you have been lied to? Keeping the truth from someone you love creates wounds. And of the many types of emotional wounds, betrayal is the hardest to heal.

3.    Reflect on your moral Principles

Someone with self-respect values honesty. Having integrity is an admirable trait. We respect influential people for their authenticity. We consider them role models – the movers and shakers in a structured society – and they are the ones who could make change happen.

It’s time for you to question if this rings true to you. Who do you consider as role models? What can you learn from them? Rebuilding trust is not an easy road, and some doesn’t even get to the end of it. Before you compromise your relationship, look yourself in the mirror and decide how badly you want to stop lying.

Read More: How to Get a Boyfriend you like

It’s a slippery slope when you started lying in a relationship, you will be tempted to do it again and again – until it’s all downhill from there. If lying is deeply entrenched in you, you will lie unconsciously when asked.

You have to be aware of the patterns that causes you to lie. Before you answer your partner or tell a story – think of the things you want to say. Are you being honest? The truth may hurt for a while, but a lie can ruin a person forever.

There’s a certain degree of freedom when you finally admit the truth. Don’t keep a guilt-ridden conscience for the rest of your life. Give yourself and your loved ones, the peace of mind you both deserve. Don’t give up. You are already working on how to stop lying. You are on a good way to change things for the better.

After this long read, unfortunately, you won’t instantly turn into an honest person. It will take a lot of hard work to keep lying even just to a minimum. Worse, if bridges have already been burned, and you’ve lost the person you love because of lying, you might not get them back.

But don’t let deceit immobilize you. Remember that no matter how bleak you feel your situation is, you can still recover from that habit. You must, however, put in continuous efforts, day in and day out.

7.    Talk to a Therapist or someone you are comfortable with

Do you still wonder how to stop lying? Are you still finding it hard to be honest no matter how much you try? You might need to consult a therapist. Confiding to a trusted friend or a support group will also help. The fact that you are willing to correct your mistakes means you are redeemable, and you understand the devastating effects of lying in a relationship.

How to stop lying in a Relationship – Conclusion

The little lies we tell everyday may seem harmless at first, but they can do more damage in the long run. It interferes with the quality of relationships we have with other people, and provides additional stress because of feelings of guilt and anxiety.

Relationships should be built on mutual trust and understanding, but it has always been a struggle for two people in love to bare everything and risk being vulnerable. It’s probably safe to say that a good foundation for any relationship is self-awareness. Know yourself and be true to yourself. Because everything starts with you.