Can a woman in a relationship deal with a man who consistently lies? If so, then for how long? And why do men lie in relationships, anyway?

One of the biggest problems women face in their relationships and even in their marriages is a lying partner. Many relationships suffer from ‘exaggerated truths’ and ‘white lies’ which slowly eat at the trust that partners have towards each other. 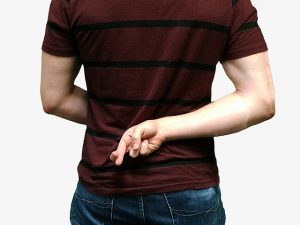 Some of those exaggerated truths and white lies are the result of partners trying to impress each other. Particularly when a relationship is just starting out.

However, if your boyfriend or husband is lying to you consistently, you need to take it seriously. It may reflect on a character trait they have built over years.

Sometimes a lie can also be indicative of issues in your relationship that you are not dealing with.

Let’s first look at some potential reasons behind why your man might be lying to you in the first place. We will then turn to answering the question how to make him stop lying.

You first and foremost need to know some potential reasons why most men lie to their girlfriends and wives.

1. Potential Reasons why many Men lie to their Partners

When you have demonstrated to your man that you tend to be dramatic and upset when dealing with difficult truths, he might develop the tendency to lie. This is because he will be trying to keep peace when it comes to discussing difficult topics. Even if he might not lie out-rightly, he will tend to sugarcoat or avoid a volatile subject all together.

If a man thinks that him telling the truth may not render any positive consequences, he may be tempted to lie so as to get out of a situation. Men are more practical while women lean towards being rather emotional. A man is more likely to say the truth when there is a chance that it will have a positive effect.

It depends on how you look at it. From one angle it might actually seem like a compliment because a man is just trying to please and impress you. However, objectively speaking this is far from being a compliment. Rather, it reflects on nothing else but essentially insecurity. It is an indication that your man is not comfortable being himself, not even with you.

This lack of self esteem and security can lead to a pattern of lying consistently and will only stop when a man starts being ‘real’ and authentic.

Now that we looked at some potential reasons why do men lie to their partners, we can turn to answering the question of how to effectively make him stop telling you lies. Is he lying all the time to the point that it is seriously affecting your relationship? Don’t panic! Here are some ways you can stop his behavior.

If you catch your man lying or strongly believe he may have been lying to you, think about what might have triggered and motivated him to lie. Thinking about the context of the lie is important. It can help you ascertain why he needed to lie or felt the need to lie.

A big reason why some men feel comfortable lying continuously to their partners is because they are or feel enabled to do so, by their partners. By taking the blame every time your man lies, you are helping him cover up for their bad behavior.

The bottom-line is that your boyfriend is an adult and as such is responsible for every action he takes consciously. No matter how you put it or the situation at hand, he had the choice to tell the truth but he chose to lie. Part of being in a mature and healthy relationship is taking the responsibility when you make a mistake.

If you have caught him lying then you cannot simply demand and command him to stop lying. Instead, you need to confront him calmly and clearly. This will be a very tough conversation so here are some tips that can come in handy;

Most of the best relationship advises for women available include tips to improve the relationship’s communication. Allow your boyfriend or husband to explain calmly why they chose to lie; however be very wary of the reasons he gives. Sometimes a man may just feel pressured to be honest. This discussion should take place sometime after the initial confrontation because it needs to happen when there is no tension or discomfort.

Once you have confronted them and then also allowed them to come clean, it is time to take your stance known. A good man will respect a woman who has strict principles and adheres to them; tell them exactly what you want but ensure that you are gentle and respectful as you do it. If you let your man get away with lying then there is a high likelihood that it will become the norm in your relationship.

Conclusion – Why do Men lie and what to do about it

A relationship is supposed to be a union of love and trust between two people. These two partners are supposed to appreciate and respect each other. Part of respect and appreciation is honesty. A woman needs to know when the lying is too much and reflects on a destructive pattern that can negatively impact your relationship.

We looked at potential reasons that can answer the question why do men lie in their relationships, in the first place.

But how about your own relationship? Does your man lie to you all the time? Do you find it hard to believe your boyfriend or husband? Have you confronted him countless times and the lying problem still persists? If your answer is YES to all these questions then you may want to consider whether it is worth being in a relationship based on lies.