Home » Get him back

I was often told that men are just simple, misunderstood creatures, but I beg to differ. In my bitter days, I would say they are complicated, confusing, and cold-hearted beasts, but even that is not entirely true.When realizing that their relationship might not be as solid anymore as it used to, women often start panicking about what to do when he pulls away. But that is more often than not a complete over-reaction, and not necessary.

If we can agree on one thing, it’s that men find it hard to communicate their feelings effectively, and women are left analyzing every minute detail to understand the sudden aloofness – the dreaded ‘silent treatment’ from their male partners. 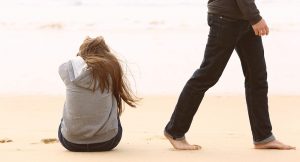 I know it’s crazy; we’ve all been there. Women often think a man’s silence spells trouble.

He might be seeing other girls. He probably realized he doesn’t like me as much anymore. Maybe he’s afraid to bring the relationship to the next level.

In a perfect world, men tell women what’s bothering them; they both fix it, and all is well again. But that rarely happens in the real world.

If you feel your Man trying to pull away, here’s what you should do:

1. Don’t overreact and don’t try to pull him back

The most important thing to keep in mind when trying to figure out what to do when he pulls away, is to stay calm! It’s pretty common for us to panic when we sense something is wrong. We hate not knowing the reason behind it, so the tendency is to bridge the gap and do the chasing and begging for answers. You have to understand that it’s natural for men, even when they are so into you, to drift away sometimes.

Some men don’t like to feel vulnerable in the relationship, and when it happens, they try to distance themselves until they regain control of their feelings. At times, they don’t even know the reason behind it. The worst thing to do at this moment is to be clingy and needy. You wonder what to do when he pulls away? Simply imagine a rubber band: let him pull away, until he bounces back to you.

Read more: Best advice on how to save your marriage

2. Give him Space, but let him know that he can rely on you

This doesn’t mean you should ignore him or be mean to him. By giving him space, you’re allowing him to get hold of his sense of self and independence. Giving him space is also a very important step in understanding how to make your man happy.  It could be frightening at first, not knowing what’s going on in his head, but when a man feels coerced, the more you can push him further away from you.

So, stop worrying about what to do when he pulls away. Resist the temptation to call every hour to check on him. If your love is strong, the gap would only be temporary. The goal here is to let him decide to be closer to you again without feeling forced. Let him sort out whatever it is that’s troubling him, but also be mindful when he’s trying to reconnect.

Every relationship is different, and there could be issues in the relationship that are causing him to pull away. You can ask him what’s wrong in a respectful and undemanding way, but don’t force him to open up.

A man who is not ready for a committed relationship or marriage will most likely ask for space without admitting it because he doesn’t want to look flaky. If that is the case, then it’s not about you anymore. Same goes with cheating men or men suffering from “grass is greener” syndrome. It is not your job to fix them or make them ready. You don’t have to make them see your worth. They should know that already.

Read more: How to make a guy like you – Tips by Experts

When we feel neglected, it’s natural for us to get angry and resentful. Although these feelings are valid, lashing out on him is not the right way to express your feelings. Encourage re-connection while maintaining your levelheadedness.

It is acceptable to try to reach out to him, but skip the blaming and poking aggressive questions.

A more effective way of communicating is by telling him that you want to understand him and that you’re ready to listen if he wants to share the reasons behind the sudden, inexplicable distance between you. He may not open up immediately, and you just have to respect that. If it’s still bothering you, you can ask him again when you are both comfortable to talk about it.

Final Thoughts on What to do when he pulls away

Love is a tug of war, and our emotional differences only complicate it more. When a person shuts down emotionally and withdraws from us, we often handle this conflict in a way that aggravates it.

Fill your life with positivism and respect other people’s needs. Make him see you as a valuable presence in his life. Sooner or later, he’ll appreciate the space and respect you gave him. If he doesn’t, then he’s not the man you need in your life.

Read more: How you can make a guy fall in love with you again